Welcome to the W.E. Bowen web site, the site has been set up to store and record all the photographs our father has in his collection. W.E. Bowen or “Billy” as he was known had a passion for photography and during his lifetime photographed many events in the Upper Neath valley and surrounding districts. Over the years he has taken photographs of many local weddings, social events, team pictures, racing pigeon pictures and local scenes.

One of his other passions was collecting and saving old photographs, many people came to him to photograph their old pictures and his payment for the work was to keep a copy of the photograph to add to his collection. Unfortunately record keeping was not one of his strong point and we have therefore lost all trace of who donated the pictures to him in the first place. If you are one of these people please let us know which photographs you “donated” and the name of the photographer any other information you have and we will endeavour to include this information in the comments.

If anyone would like to donate old  pictures in the future, please forward them to us with any relevant information, such as where and when the picture was taken, who took the photograph and who is in the photograph, If we then think it`s suitable we will include it in the website. Who knows over time this website may become the definitive library for photographs of the area,

This website is not operated for monetary gain, and is purely for the benefit of those persons with an interest in the history of the Upper Neath Valley and Districts.

Ownership of copyright of some material is not assumed or implied. If any party considers their copyright has been breached and permission to display is not granted, then the material will be removed, with apologies.

A little bit about Billy.

It`s not until you have to sit down in front of a blank page to write about your fathers life that you realise how much you don`t know about him, which I think is a great shame. We tend to take things for granted and maybe we should have talked a lot more to our father when he was alive. Anyway let`s try to get something down on paper.

Our father  was born in Glynneath on the 31st May 1929, and was christened William Emlyn Bowen or Billy as he was known. His parents, my grandparent`s were Emlyn Bowen and Gwendoline Bowen and for a number of years were the hairdressers in Glynneath. Dad went to school in Glynneath and left to work in the family business at 15 years old, were he trained to become a barber. Emlyn his father had by this time been posted to Germany were he served as a medic, therefore my father was required to work to keep the business going.

During his early years Billy joined the Glynneath Cadet`s and there are a number of pictures of him in uniform on this site. 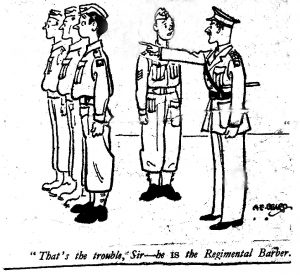 Then at the age of 18 he was called up for National service and served the majority of his time in Scotland, where he developed a love for Scotland, the people and their music, much to my mothers annoyance. As the cartoon to the left shows to carried on with the haircutting business, by being co-opted to serve as the Regimental barber.

On returning from National Service he met my mother Mair Jones, a Cwmgwrach girl, probably at the local dances in the Park Hall. On the 6th of  December 1951 the were married at the Registry Office in Neath, with the reception being held at the Ambulance Hall in Cwmgwrach.

Billy continued to work in the Barber shop in Glynneath, which was originally situated in Heathfield Avenue opposite were the Co-op is now. The shop then moved to the High Street at number 40, opposite the Post Office. I am not sure of the dates when the shop moved or whether dad worked at the shop when it was in Heathfield Avenue.

Around this time and in conjunction with his job in the barbers my father also developed (excuse the pun) an interest in Photography, and this website has been created to store and share the pictures he took and collected. He regularly attended the Camera Club in Neath and also to improve his photography skills attended a photography course in Barry, South Wales. I recently found out from my mother that when my father was quite young he would spend time with the Glynneath photographer M. C. Chesterfield who apparently lived in Park Avenue, Glynneath. Possibly it was during these visits that his interest in photography was kindled. When Mr Chesterfield passed away his photo collection was bequeathed to my father. So some of the photographs in this web site would have been taken by Mr Chesterfield.

In the July of 1953 his first son Roy was born followed and a few years later in December 1955 followed by his daughter Jean.

By this time the family had moved from Fothergill Road, Cwmgwrach to the new council houses in the Lamb and Flag, moving in to Craig Nedd in 1955, where he continued to live until he passed away in December 2012 and is still the family home.

As well as the hairdressing business in Glynneath, Billy also opened a hairdressing shop in Cwmgwrach in the first house on the left as you enter the village. This shop continued to work until the closure of the pits, when most of the work generated by the miners dried up. The shop was open for a few days a week and Billy could always be seen cycling back and fore to work on his bike.

Once the business in Glynneath had finished on the retirement of my grandparent, Billy found employment at Cam Gears later called TRW Steering Systems. He thoroughly enjoyed his time there working on the Rack and Blow Moulder sections, and formed many long lasting friendships with his work colleagues.

During all this time working as a Barber and then Cam Gears, Billy continued a professional career as a Photographer. Although his time spent working shifts at Cam Gears meant the photography became more of a hobby.

Billy was also a keen fisherman and spent many an hour tying flies and fly fishing on the river Neath, I remember the day he came home with his Split Cane rod in many pieces after he failed to land a large fish. He was a member of the Glynneath Angling society for many years, and took many pictures of the annual children’s fishing competition. Billy was also a member of the Glynneath and Cwmgwrach Historical society and after retirement attended many training courses at Glynneath training centre to keep his mind ticking over. He attended many computer classes which enabled him to combine his love of photography in a new way, and in later life spend many an hour scanning in his collection of old pictures. It was this dedication that gave me the thought to continue his work and finish off what he started by making this web site. I hope you enjoy it.