I mention in my last post that I would like to give some more details to some of the photos in my fathers photo collection, so here is my first blog.

In the Easter of 1946 the Glynneath Cadets visited Paris to see the France v`s Wales Rugby International, the war had just ended the year before, and they were the first official visiting party to be given approval by the relevant authorities. This visit was reported in the papers at the time and I have copied the text from one of these reports below, so that you can read for yourself the story of the trip.

Enterprise of the Glyn-Neath Company of the 15th Battalion

Some months ago the Army Cadets at Glyn-Neath decided that they would like to go to Paris to see the Wales  v, France Rugby International. The authority of the War Office was sought with the result that, although the time was not opportune to authorise an official party, the Army authorities replied that they had no objection to them going in uniform if they could make their own arrangements.

Captain D.L. Nicholas, the Company Commander, with his usual resourcefulness set about the task. First of all the Cadets who could go started to save up their money, contact was made with the French Consul in Swansea who promised his unstinted help. Lieut.-Colonel  K.M Jones, the Battalion Commander asked the County Commandant, whom he found had a personal friend at the Embassy in Paris, if he could assist.

Various agencies were written to and seen with the result that before very long it appeared thet the trip was “On,” and that more detailed arrangements could be made, and finally twelve Cadets left Glyn-Neath under the Command of Captain D.L. Nicholas, with Under Officer Wynn Lloyd, Under Officer Meredith Davies and C.S.M. David Nicholas.

Before leaving Neath, the party were recipients of daffodils, presented with the good wishes of Lieut.-Colonel  H.M. Jones and Mrs. Jones.

After a few hours in London they left on the 7:30 a.m. train for Newhaven, and after a rather rough crossing arrived at Dieppe at about 2 p.m. The lads were thrilled to think that they were the first Army Cadets to visit France and as soon as they were ashore they went exploring the shopping centre of the French port. Leaving Dieppe, they were very excited when they saw the lights of Paris about 15 kilometres away, but there was some speculation as to how they would fare when they arrived and whether any arrangements had been successfully made.

Their minds, however, were quickly at rest as they were met at St. Lazaire Station by the Assistant Military Attache from the Embassy and they were within ten minutes comfortably housed at the Hotel Cavour in Rue Lafayette, the very efficient arrangements for their accommodation having been arranged by the British Leave Club.

On Saturday morning they were received by the Governor of Paris, Colonel Rogeot, and accompanied by other officers of the French Army were entertained at the Officers Club De France. Later they were conducted around the Invalides by the Field-Marshal Earl Haig`s niece and a French Cavalry officer.

After this they visited the Arc de Triomphe, where they filed past the tomb of the Unknown Warrior to pay a tribute. Later they paid a visit to the Grand Palais Versailles, the Petit Palais, the little hamlet being fully described to them. They also saw the Bastille, Chamber of deputies, Champs Elysees and the Trocadero.  Lieut. Stewart of the French Army very kindly conducted them and was a most interesting and informative guide.

On Easter Sunday they attended service at the Notre Dame and the ceremony of kissing the feet at Madeleine Chapel undoubtedly left a lasting impression on the minds of the lads. Other places of note visited were the Aquarium, Grande Palace (where President Le Brun lived), Eiffel Tower, Hotal de Ville (City Hall), and the Church Sacre Coeur.

They visited both the Secondary Schools and were guests at the Wales v. France Rugby match.

In the broadcast account of the match it was stated that two Welsh Guards climbed the goal posts before the match to attach the traditional leeks, the crowd being very amused. In actual fact they were not two Welsh Guardsmen but two Welsh Cadets from Glyn-Neath. At the end, although their National side were defeated, they carried the French captain off the field, a gesture that was much appreciated by the spectators and given headlines in the French newspapers.

They arrived home happy and tired, but having enjoyed every minute of their trip and having brought back many memories. The splendid hospitality accorded to them by the French was a feature of their visit, and their first visit to the Continent can be called a very great success. They are all most grateful to those who took an interest in their enterprise, to the Embassy, to the French Consul in Swansea, to the British Leave Club and to the French authorities—especially the Army.

Next year, yes, already next year is being thought about, they hope it will be the Belgian capital, Brussels, then.

I have also include some pictures from the game, a copy of the programme and the text from 2 of the newspapers that reported the trip.

I wonder who the 2 Cadets were that climbed the posts? Anyone know? 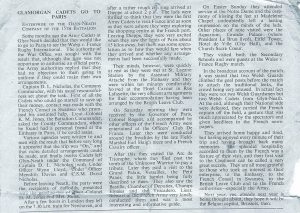 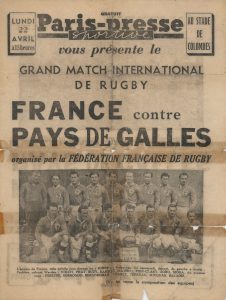 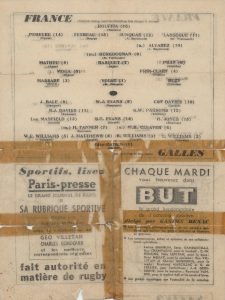 My father Billy can be seen in the last picture, the 3rd cadet from the right. 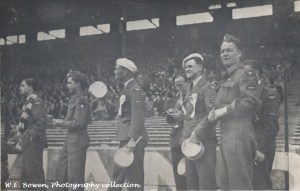 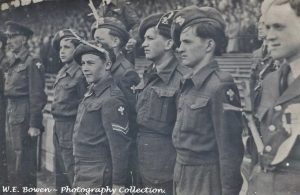