Tales of the “Craig Nedd” Riverbank:

I moved to 32 Craig Nedd, Glynneath on New Years Eve 1955 when I was 1 1/2 years old. The council estate we lived on had all new houses and flats and there were an abundance of recently married couples with their young children moving in at the same time as us. The street we lived on was right next to the River Neath and you can imagine as a young child the pull the river had on us young children. We spent many a happy hour or three on it’s banks or in the river itself, times have changed now and I don’t think you would see the children of today being allowed to do what we did in our time. There was even a wood across the river for us to play in, and beyond that the main railway line and the branch line which crossed the river at the Langy Bridge to the Glynneath sidings.

The following blog traces the history of the river during my time of living at Craig Nedd and all the changes that have taken place over that time. It will follow the events that have taken place from floods, cold spells, changes to the river bank due to the floods and will also look at the river during all seasons. I was lucky enough to have a father who was a photographer, so I will use his photo collection to illustrate the events as they took place at the time. 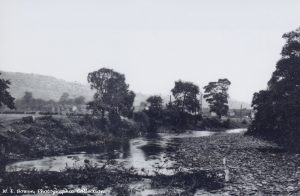 So let’s start at the beginning, just before I was born, the housing estate was built on two fields to the right of the Cwmgwrach river bridge as you leave the village, you can see the fields and the river (pic 1) before the houses were built. My mother clearly remembers that these two fields were regularly flooded, but nevertheless the council decided to build there anyway, nothing changes eh!! 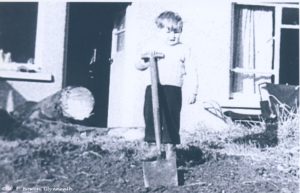 My first memory was having to help my father to clear the back garden from all the debris and as there was a tree on the garden that had been chopped down cutting it up for firewood, Although I must say I was very young so I was probably more of an hinderance than a help. (See pic 2) I remember my mother and father always reminiscing about the fantastic crop of potatoes they had the first year they planted up the garden.

There were many children on the estate and in the summer we would spend hours paddling in the river (pic 3) and catching small fish in the pools at the side of the river, (Bombleyes, catfish, minnows) we would even try to damn the river when the river level was low. There were even some deeper pools were you could swim a little bit, but overall it was mainly paddling. Other activities taking place on the river bank were building bonfires on Guy Fawkes night, building dens and fishing as we got older. 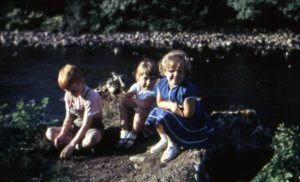 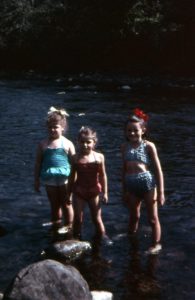 The winter of 1963 (The Big Freeze) was a particularly bad winter with a long cold spell which lasted from just before the new year until the first week in March, and in this time the river froze over completely . (see pic 4 and 5) This was an idea playground for youngsters and we quickly fashioned sledges and donned our winter woolies for some fun on the ice. If I remember correctly the schools were mostly closed during this time as well. There has been many large snowfalls since in 1982 and 1991, but we have not seen such a cold spell to freeze the river like it did in 1963. 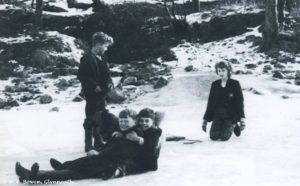 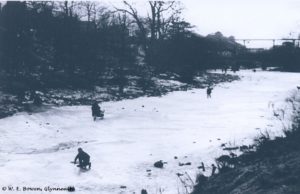 There have been a number of big floods over the years, mostly in the spring, where we would see from the comfort of our upstairs bedroom window whole large trees being carried.down the river and sometimes getting stuck under the Cwmgwrach bridge. If these floods coincided with a big tide 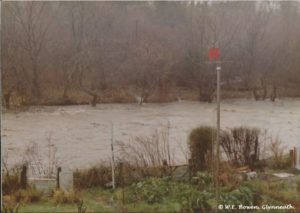 the depth of the water would be further increased, I have seen the water actually coming into the bottom of our garden and at night you would lay awake and hear the boulders rumbling along the river bedThe worst of these floods took place in 1974? when the river bank was washed away. We went to bed one night and when we woke up in the morning found that the houses below us had all been evacuated. The river bank had washed away and half the gardens of the housed below us towards the Cwmgwrach bridge were no longer there. You can see a picture of this flood in (pic 6) and you can see the reconstruction work in the following link. 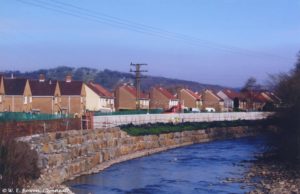 Further deterioration to the river bank occurred over the years mostly due to the building of the new road and retaining walls that were built.The retaining walls on the other side of the river had a tendency to push the river to the other band were it started to wash the bank away. After this was pointed out to the river authorities they carried out an investigation and concluded that a retaining wall needed to be built. This flood defence wall was constructed in 2000 and again my father took pictures of the work in progress (pic 7) which can be seen by following the link to the  slideshow. Unfortunately the downside of this wall is that it has now cut off access to the river and our view of the river as well…….. Progress? I’m not too sure.